The emblems and insignia of Lambda Chi Alpha serve not only as symbols of our fraternal identity, but as a sort of Ritual incarnate, everyday reminders of our ideals.

According to the History of Lambda Chi Alpha, we are the seventh order espousing knightly ideals to use the crescent as a symbol. It signifies eternity, purity, fertility and growth, and submision to divine law; it was the symbol adopted by the legendary founder of Lambda Chi Alpha, Rene of Anjou.

The “crest” is a symbol identifying a warrior attached to the helmet; the term should not be used to refer to the full coat of arms. Mason explained the use of our crest in these words:

For a further symbol we took the cross of St. George—who might almost be called the patron saint of brotherhoods. By a happy thought of one of our members, we placed the rising crescent behind the cross. As Brother Wurster (who is something of a poet) remarked, ‘There you have aspiration and sacrifice together, which follows out our motto.’

Perhaps the most commonly seen artistry representing Lambda Chi Alpha is our coat of arms, developed— unlike that of most fraternities— after careful study of the rules of heraldry. Designed by Jack Mason of Epsilon Zeta (University of Pennsylvania), it displays our three open mottos, translated from top to bottom, “Crescent in the Cross,” “Naught Without Labor,” and “Every Man a Man.” Present are the crucicrescent, the lamp of learning, the clasped hands of brotherhood, and other symbols, as well as the inescutcheon signifying our merger with Theta Kappa Nu, and the badge of membership below. In the medieval rules of heraldry it would be described as such:

Escutcheon: quarterly 1, vert, a lighten Greek lamp or; 2, or, an open book proper, bearing on its face the letters Chi, Omicron, Alpha Zeta; 3, able, a balance, or; 4, vert, a pair of clasped hands argent, between three mullets in chevron or; over all an inescutcheon argent, lion rampant holding a white rose slipped proper.
Behind the escutcheon a pair of swords in saltire, points downward, argent, pommels, and hilts or. Mantling vert, lined, or.
Encircling the escutcheon a riband purpire, edged argent, bearing the Greek motto Chalepa ta Kala surronded by an olive wreath which bears pendant the badge of the brotherhood.
Below the escutcheon a scroll with the Latin motto Vir Quisque Vir.
Crest: issuant from a crown celestial or, ensigning a gentlemen's helmet proper, a crucicrescent rayonne or, Latin motto Per Crucem Crescens, on scroll.
[from Baird's Manual of American College Fraternities, 19th Edition, (1977), p300.]

At the center is found the fraternity mascot, the lion, holding a white rose, the fraternity flower. Part of our heritage from Theta Kappa Nu, this emblem is unique in fraternity heraldry, a powerful symbol of Strength Protecting Innocence.

Members of Phi Beta Kappa and other early literary societies carried stylized keys to signify membership. Among general fraternities, the badge has for the most part evolved into a pin worn on the breast, in the form of a ritualistic symbol or the organization’s letters. Lambda Chi Alpha shares with Theta Chi, Triangle, and Alpha Chi Rho the distinction of including both a monogram of its letters and a key fraternal symbol. The Badge is properly worn over the heart, preferably with a badge guard bearing a monogram of the member’s zeta designation, and only by initiated members, their wives, and their fiancees (special exceptions may be made for some housemothers). 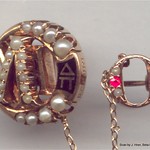 The Badge of Membership of Lambda Chi Alpha is among the most meaningful in the fraternal world. Each stone, letter, and line, and each circle of the crescent has a special meaning. is made with the lambda being struck separately from a single piece comprising the chi, alpha, and crescent. The background for the letters delta and pi is enameled, and the lambda is joined to the remainder of the badge (always yellow, white, or green gold) before the eight crescent pearls and (optional) stones in the lambda are set.

The Badge and Omicron Zeta

Cornell’s chapter of Lambda Chi Alpha holds a footnote in our fraternal history. The earliest badges of the fraternity, apocryphally, were commissioned as a prank by Warren A. Cole, Lambda Chi Alpha’s founder, in 1911, and produced by J.G. Johnston of Boston, a maker of Masonic medals and police badges. Albert Cross of Epsilon Zeta at Penn had pins made at William Thegen’s Sons, Philadelphia jewelers, but the chapter was unhappy with their quality, and switched to Hoover & Smith.

Reforms to the Ritual and symbolism of the fraternity under Jack Mason necessitated changes in the design and the adoption of a standard badge. Cole wrote to Robert Currie of ISWZA on August 28, 1913, as the men were preparing for their installation as Lambda Chi Alpha six weeks later:

Another thing I might call your attention to is that Hoover & Smith Co. put out a circular stating prices on different combinations of colored stone badges. (Rubies, Emeralds, Amythsts [sic], Sapphires, etc.) I will admit they are very pretty. But after taking our Lambda Chi Alpha Ritual you will find the reason for having white stones upon your badge (pearls).

In the event, Omicron Zeta did not order badges from Hoover & Smith. Instead, they commissioned badges from the L.G. Balfour, Co. of Attleboro, Mass. Balfour was founded by fraternity men (“Bally” himself was a Sigma Chi), but because of the youth of our Fraternity, and the fact that they dealt exclusively with our chapter, Lambda Chi Alpha was listed for some time in their records as a local fraternity at Cornell. The following year, at the national convention hosted in Ithaca, Cole was awarded the right to handle fraternity jewelry sales in lieu of a salary, and despite Balfour’s superior workmanship, resisted awarding them the official jewelership. In 1920, Cornellian Ernst J.C. Fischer ’10 ousted Cole as Grand High Alpha— with Balfour’s backing— and the fraternity’s jewelership would be held exclusively by Balfour for another fifty years. 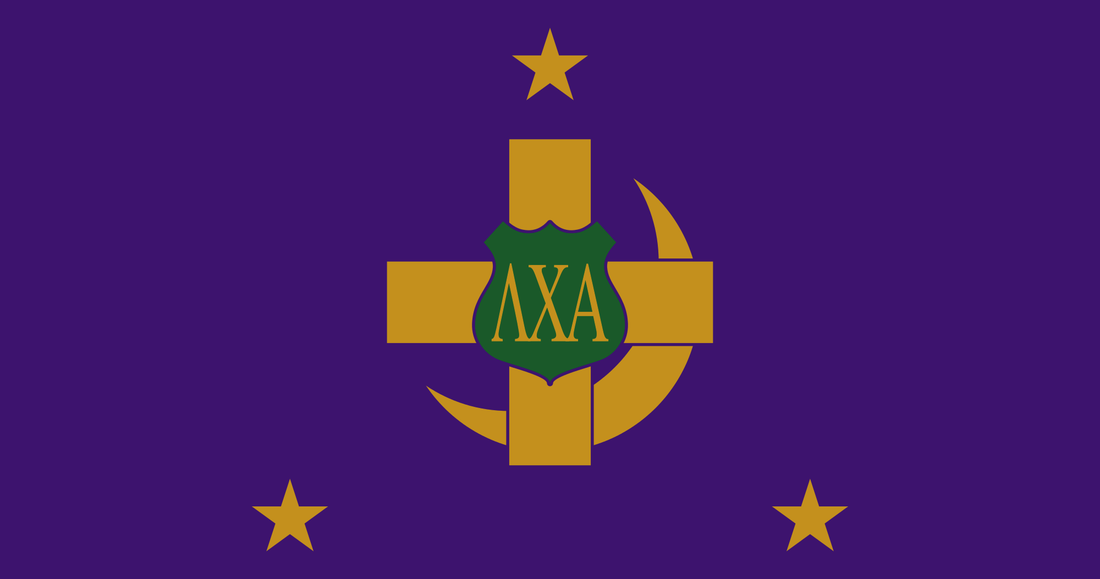 The flag displays the letters ΛΧΑ in gold on a green shield, superimposed on the gold crucicrescent on a purple ground. The chapter’s Zeta letter is placed in the upper right, one-eighth the height of the flag.

The Friendship Badge, created by Jack Mason following controversy over whether sisters, housemothers, and steady girlfriends could wear the badge, is a crucicrescent with a shield superimposed and the letters of the Fraternity written onto it. Created by Balfour, it “carries no promise of protection from the Fraternity, and is simply a casual compliment. It does not require the salute of removing one’s hat…” 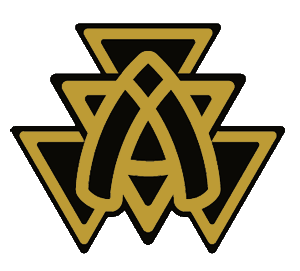 The Associate Member Pin consists of the letters lambda, chi, and alpha formed into a Gothic arch superimposed over four triangles (another symbolic union of Lambda Chi Alpha and Theta Kappa Nu). Its symbolism is given in the Associate Member Ceremony:

(High Alpha) As a token of your acceptance of our pledge and of our desire to be of assistance to you, whom we hope to know as brothers, you have been invested with the badge which is the emblem of Associate Membership in Lambda Chi Alpha. It consists of four equilateral triangles, standing for fraternity patriotism, learning and morality, and upon them has been imposed a monogram of the letters Lambda, Chi, and Alpha, the significance of which will be explained to you at a later time.